In 2015 I went to my first BrightonSEO conference. Tomorrow I shall be attending for a fourth time. It is that good.

As the founder, Kelvin Newman, proudly tells (even in the conference’s slogan) it’s “A long way from a room above a pub.” where the first BrightonSEO took place.

Given over 3,000 people from all over the world now attend I’d say that’s something of an understatement.

I’d be lying if I said it wasn’t an ambition of mine, starting Optimisey, to one day be as successful as BrightonSEO.

Baby steps though. I’ve yet to host my first SEO event – my anecdotal ‘room above a pub’ – but aim for the stars.

Who to see in Brighton?

If you’re unable to come to BrightonSEO 🙁 sad face, you can:

I shall be Tweeting as many useful, insight-filled nuggets as the wifi allows.

As a conference ‘veteran’ now, who am I going to see this Friday?

After getting up at ouch o’clock I’ll be dosing up on caffeine and for session one, heading straight to Auditorium 1 for the talk on Ranking Factors. 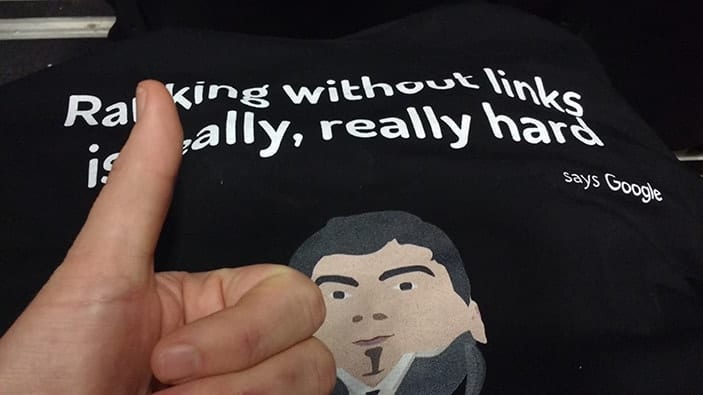 I’ve seen Christoph speak before. If you can look beyond the dazzlingly bright shoes and blazer he knows links really well – as this t-shirt conference swag, quoting Google’s Gary Illyes, shows (though how it came out as black with Christoph’s penchant for bright colours is beyond me!).

Jo and Daniel are going to talk about their insights into ranking factors. Given they work for SearchMetrics – an enterprise level SEO tool with, presumably, access to reams and reams of data – you’d expect they have a pretty good handle on this.

But the real draw to this session, for me, is Duanne Forrester.

Now at Yext (an online Yellow Pages (who partner with yell.co.uk in the UK) if you’ve never heard of them) formerly at Microsoft and one of the brains behind launching Bing, Duanne’s also a published author (of How to make money from your blog and Turn clicks into customers) chances are Duanne knows a thing or two about search – and importantly for me, search beyond Google.

I find my best laid plans thrown into disarray here. I was almost certain to be staying put in the main Auditorium for the next hour plus of SEO goodness – this time on Advanced Keyword Research.

Speakers were set to be: Sophie Coley, Stacey MacNaught and it was going to be Bill Slawski (something of a hero of mine) who has, sadly, had to drop out at short notice.

Bill, if you’ve not come across his work before, runs SEO by the Sea which aims to help people, as his own strapline puts it “Learn SEO Directly from the Search Engines”.

He does this by investigating their patent applications (ingenious) working on the assumption that, if they deem it important enough to legally protect it they may be planning to do something in this field.

As Bill himself (and Google employees too) applying for a patent does not mean they’re definitely doing that. But it’s still a flipping good clue.

I’m gutted that Bill won’t be there.

However, Stacey is pretty awesome too – which doesn’t make my decision to defect from this session as cut and dried as simplicity would prefer.

Stacey’s a kind of ‘poacher turned gamekeeper’ in that she started out in content and has detoured into SEO.

She’s also spoken at a number of events this year (I hope she’s collecting air miles!) and if, like me, you’re an SEO nerd on Twitter, you’ll have heard lots of positive things about her sessions at other conferences.

The third speaker, Sophie Coley’s session on the terrific answerthepublic.com is tempting too – but I’m already quite familiar with that tool so tempted to branch out.

If I do turn it will be to Auditorium 2 for the session on Onsite.

There are three new (to me) speakers there: Aysun Akarsu, Sébastien Monnier and Chloe Bodard. The latter is from agency RiceMedia, one of whom (Michelle Race) made my ‘Top 20 Rising SEO Stars on Twitter‘.

Smart people generally employ smart people, so I’m confident that by proximity to Michelle alone, Chloe must be pretty smart too.

I must remember that, whilst Optimisey is important, my employer (and indirect payers of my mortgage) are the ones giving me a day out of the office and covering my travel expenses etc.

With that in mind, Aysun’s Onsite session on HTTPS will be especially relevant – given that’s where we (along with the majority of the online world) are headed.

After lunch it’s a no-brainer. I’m heading to Technical SEO in Auditorium 1 again.

Dawn Anderson is a ‘must see’ for me. She, like Bill, falls into the category of “probably forgotten more about SEO than most people know”.

At my first ever BrightonSEO I went to her session on search engine crawlers and it was a real eye-opener.

OMG. I have finally finished my Brighton SEO deck (minus a bit of slide shuffling). Has taken me yonks to do. I could pass out…Drained

So you know that Dawn takes this stuff really seriously and puts her heart and soul into providing useful, original and engaging content.

[tweetshare tweet=”Dawn would definitely be on page one of a SERP about SEO speakers.” username=”Optimisey”]

Throw in the fact that, also in that session is Peter Nikolow – another speaker I’ve not seen myself before but heard a lot of good things about – and this session brushes aside any other competitors for my attention.

Final full session of the day (closing session excepted as there’s no choice required there!).

Again, I’m torn. AMP in The Restaurant or Outreach in Syndicate 1&2?

The Outreach session has three speakers I’ve not heard before which is always tempting. With conferences I have a similar approach to travelling – if I can visit a new city/hear a new speaker, why wouldn’t I?

I’ve heard Aleyda before, she’s terrific. Heard stacks of praise for Jon too. The fact their sessions are, seemingly, pro and anti AMP makes it really tempting to go and watch them battle it out.

But Outreach is hard. Outreach is time-consuming. Getting links is important. So sessions on How to make sure journalists include links in their coverage – something, in my day job, I struggle with on an almost daily basis – is really tempting too.

Add a session on How you can use automation to personalise outreach? and I’m leaning back towards the Outreach session.

OK – at time of writing I’m going to the Onsite in session 2 and AMP in session 4.

When I come to my post conference review, don’t be surprised if I did entirely the opposite!

Damn you BrightonSEO and your raft of awesome talks! *shakes fist*

This is my smiling mug: 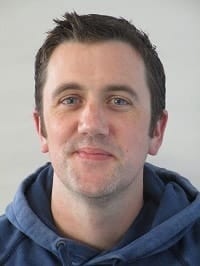 If you see me, say hello!

I shall also be networking my butt off, trying to meet more great SEO folk to either attend, sponsor or speak at future Optimisey events (or all three?) – as well as catching up with friends and basking in the brain-expanding loveliness that is BrightonSEO.

This site uses Akismet to reduce spam. Learn how your comment data is processed.