As well as being an SEO Consultant, I’m also running Optimisey as a small business – and learning a lot along the way!

I’ve found some good techniques, tactics, tools and groups. I’ve pulled them together here in the hope they can help you too.

If you’re after my tips for the best SEO tools here you go.

Even before Optimisey even really existed I won a competition to get some branded t-shirts!

After rapidly calling in favours to get a graphic put together (and having some trusted folk vet my ‘hilarious’ t-shirt ideas) I came up with the below.

And pretty quickly got some ‘great return on investment’. 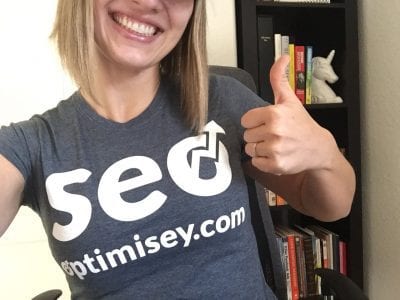 I listen to a lot of podcasts. I love them.

I’ve tried a lot of them but here are my ‘must listens’ from all those I’ve tried.

There is a strong SEO-slant here (as you’d expect) but my tastes do go broader than that, honest.

My top-rated SEO podcasts (and other podcasts too!)

I’m big on Twitter. Not in an “I’m famous way” I mean in that I really enjoy using it and have found it a great way to promote Optimisey.

I’ve written about the Top 20 SEOs to follow you haven’t heard of yet.

That ‘Top 20 SEOs’ article got some great traction on there, including ‘re-tweets’ from some big names in SEO. I put some of them in a Twitter ‘Moment’.

The first ever Optimisey SEO event was promoted almost entirely on Twitter. 60+ people showed up to that which I found hugely encouraging.

It’s also been a great way for me to connect with people, both attendees but also speakers and potential speakers, so it’s probably not a massive leap to say Optimisey may not exist without it.

Facebook is a great place to promote your business too (though less and less these days).

One of the best things I’ve found on there is the groups. Business groups especially.

There are some terrific ones out there, filled with people that have fought (or are fighting) the same battles as you; are happy to shares ideas (or their honest feedback on yours); or for you to hook up with suppliers whose services you need or who might need yours.

You can, of course, find Optimisey on Facebook too.